The little museum of Bede’s World, up on the south bank of the Tyne, has closed unless funds can be found to save it.  If this was a London museum, it would be sad, but on Tyneside it is tragic.  It honoured the history of an area which often feels forgotten and where aspirations are sometimes low.  That Tyneside was a centre of learning and culture needs to be remembered and celebrated. 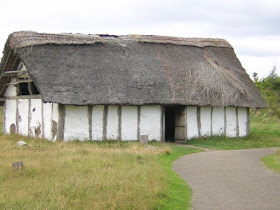 It was a small museum, but one which punched well above its weight.  Visitors learned about the Romans, and a bit about what happened when the Romans went home, and lots about Anglo-Saxon life.  They picked up some history of culture, religion and science, and there was art and design to appreciate and Celtic colouring sheets to take home.  That was the indoor bit, which also had decent toilets, a little shop with coasters and pens and a nice little café next door with a glorious herb garden for sunny days.  All in all, it was a decent day out.

It was the outside that brought the past to vivid life.  Real animals, real wattle and daub replica buildings, and you got just about as good a sense of what life might have been like over a thousand years ago as a twenty-first century visitor could hope to achieve.  If you were little, you could run in and out of the buildings, sweep the floor with a besom, talk to the goats and marvel at the enormity of the pigs.  Older people read about the exhibits and chatted to the volunteers who actually got on with the work of farming, Anglo-Saxon style, right in front of you. We experienced things directly with all our senses, including some rich Anglo-Saxon smells.  It was short on electronics and long on joy. 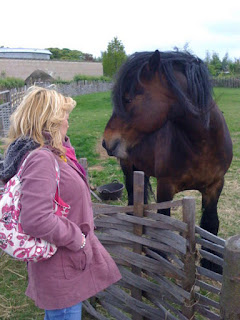 From our many visits, it’s the freedom I remember.  We weren’t kept in neat lines to view objects, we were encouraged to get our feet wet and to poke our noses into everything.  We learned about history, and about the history of history, but not without having fun.  The animals were essential to the experience and we learned that they would have their picture taken, or not, as they chose. We realised how people lived cheek by jowl with their pigs and goats and how they were dependent on their animals and plants for survival. Respect for the natural world and for agriculture was instilled without preaching.

Years after our many visits, long after we moved away from the North East, I still remember Bede’s World and I wept when I saw it had closed.  In September my daughter is likely to start History A’Level.  I am sure our experiences at Bede’s World helped to awaken in her the idea that history is not a dead subject, but the process of bringing the past to life.


Bede was a great scholar, allowed to study and to write his history and theology because, in the eighth century, a high premium was placed on learning and scholarship.  He is a towering figure in our culture and deserves to be celebrated.  Thirteen hundred years later, his memory should be celebrated and honoured, and Bede’s World did this in style.  If it does not reopen, the children of Tyneside will, shamefully, be denied a part of of their rich and beautiful heritage.